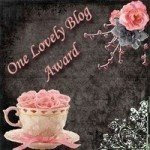 Thank you Danette for the lovely blog award.. what a lovely surprise
Today we went to see the Genetics doctor. I had gone to a Floortime conference in DC in November and a doctor from Kennedy Krieger had a made a really interesting presentation.
Basically he talked about how you no longer needed to do a muscle biopsy to diagnose mitochondrial dysfunction. You could now diagnose it through an outpatient fasting blood test.
Also that there was a treatment for it.
These were the two main reasons why DH and I had never pursued this –( the test would be painful for R and we did not know if we would do anything different )
Anyway this had made us want to atleast talk to a Genetics person .
We did .
She did take a cursory look at the presentation but really wasnt that interested
Her opinion was that kiddos with mitochondrial disorders will present in some other prominent things as well - exhasution, small illnesses becoming major illnesses, and also MR - she did not think we would get a high yeild going down the paths of testing but was open if we wanted too
I cannot tell you how relieved I am not to go down the path of more blood work- atleast for now
She also said that if we ever get an MRI done or an EEG done we should let her know that then she woudl draw some blood while R was under sedation. I appreciated this very much and also at the fact that she did not rush us
And while I appreciated very much her desire to sympathise -- it was really annoying to me as well. Her saying things like " it must be all the more frustrating for you to know that he is so bright that he can read but still cannot communicate" ( Intriguing, fascinating - yes but its NOT frustrating - at least that is not my main feeling regarding this- I am THRILLED he can read- and he does communicate a lot )
Her hangdog expressions while saying things like " has he made any progress in the past 2 years?" Ughhhhhhhhhhhhhhhhhhhhhhhhhhhhh
It was clear to me that she was expecting a Poor me attitude from us and even in the face of us looking and acting cheerful and optimistic - she could not let go of that
One big truth that I am coming to realise is that that the person who has the most puzzle pices in their hand when it comes to their autistic child is the parent.
The specialists are great at their specialties but not at the whole view of the child ( one reason I like R's psychologist -0 Dr Neece so much - she gets the whole kid )
While leaving the office I overheard the receptionist giving an appointment for a child with Fetal Alcohol Syndrome
Grrrrrrrrrrrrrrrrrrrrrrrrrrrrrrrrrrrrrrrrrrrrr-I cant beleinve the moms who go on alchol binges when they are pregnant
at January 20, 2009