The Parallel Universes that Shape us

On Monday, DH had a game practice.

As there is famous children’s park near the practice court, I and R went along.
Its an innercity park – very different from where I live.

Almost like a parallel universe.
And not just in the diversity and other socioeconomic things that are obvious on the surface.
But for things that my eyes- shaped as they are by my own life - notice acutely

First,for being around Neurotypical kids. I am frequently amazed by just how different they are.

Its in the very chemistry of each interaction.

In the scraps of the conversations around me.

Two boys are talking. One of them is casual, barely there. The other is eager( and trying not to seem to eager ) and placatory urging the careless one to try and change his nature so “people” will understand him better

(I notice later that the negotiations have failed. Perhaps one went too far on the “don’t really want what you have” continuum.)

NTness is displayed in their desire to define and express themselves 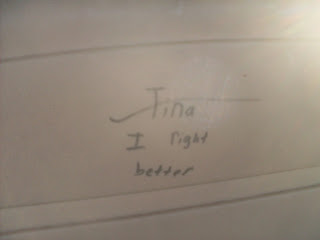 NTness abounds in the signs of executive function as well as an urge to engage people – anybody –even those you don’t know.

Its evident in a kind of treasure hunt that someone has set up. 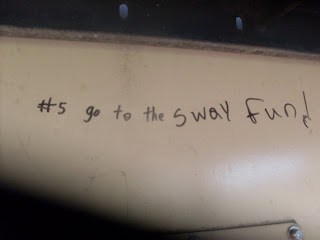 (I of course being quite NT myself am compelled to follow the signs and am bereft when the trail ends abruptly after #5 the “Sway- Fun”- either wiped away by the diligence of a worker or perhaps the child was distracted before they could complete the trail )
All the children are engaged in the dance of social interaction.
R on the other hand is only now starting to notice the small people – his peers. He looks up curiously from the bottom of the slide , as the child on top of the slide is yelling “MOVE”( I don’t know if he does not know the word “move “ or if he is astonished that this little person intends R to do something )R is so stunned when this child slides down and he is displaced from the slide.

I am proud that he does not cry and that I did not intervene. 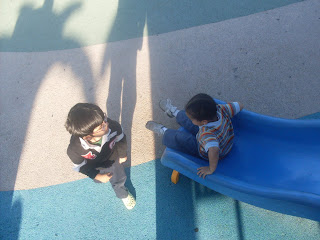 Second is the different style of parenting .
These parents clearly love their children – after all they are choosing to spend their evening playing with their kids in the park.

But their style of parenting is sooooo different from my own.

Clearly they have not read the books !

In front of their children ,they are smoking and swearing.

Not trying to hide rolls of fat.

The careless way they have around their children.

A general belief that their kids will be just fine .

No anxious eyes watching their children,

None of that fear- that I see in the eyes of Autie moms - that, but for their constant watchful care, their child will be irrevocably damaged.

I look on (aghast) as one mom with raucous exuberant personality who was turning cartwheels earlier ( can you see her upside down in the background ) is getting her child to hang on to the balance bar.
She then moves away - ignoring his protests-assuring him he will be just fine if he falls ( he does fall – but the ground is soft and he is just fine though he cries for a few minutes -unattended ) 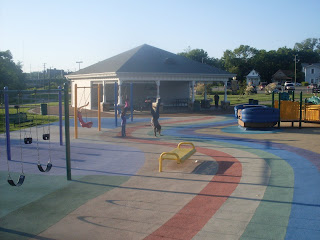 Autism land is completely different parallel universe from this carefree parenting.
Here - we are so profoundly aware of our actions .
Deeply believing that all our actions have permanent meaning for our children’s past present and future.
Example our belief in the following three things we are responsible for

One, we did not prevent autism.( by not doing whatever we did - does not matter what it was)
Two we did not notice autism when it started.
Three, we are not curing the autism with all the things our kiddos need.

The amount of responsibility we put on our shoulders is staggering.

In contrast, this completely carefree way of parenting offers an unbeleivable alternative in all its assumptions.

Even though I notice just how different R is from these NT kids – I also see how he IS developing.

Noticing the other kids 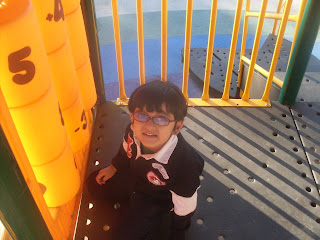 Learning how to pose for the cameral .As always, its taken me showing him the logic of posing ( by showing him his pictures in the camera after I take them ) rather than him just posing for the picture because I want him to .

Also, even when I see just how different my parallel universe is – I also see the similarities.

R is not the only solitary child in the ground. Inside this structure is a 12 year old child, overweight and with a visible aura of defiant loneliness.

Can you see him inside the slats of the window? 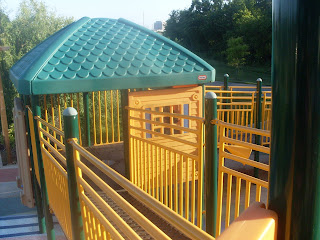 When I smile and ask him if everything is okay.( knowing at that moment that I should have left it at the smile , people- especially lonely people -HATE pity )
He looks back at me and says “jus playin my videogame”

Which would be believable if I had not seen him earlier eyeing the children playing with a look of naked longing.

Similarly, this mother who has left me aghast when she asks her young daughter to hold her cigarette while she hoists her jeans up , is showing just as much pleasure as I do when she catches her daughter coming down the slide.

Parallel universes should be no surprise to as I am an accustomed space traveler.
Living, as I did, for the first 26 years of my life in India – a country where parallel universes are the rule!

And then coming to a completely different world

They have made me who I am

and so many more.

How many parallel universes are there?

How different my life- and indeed I - would be - had the journey of my life taken me to different universes than the ones I landed in.

And the two hours pass and its time for us to leave and join DH back as his softball game is done at 8
Though I am sure that R musts be very overwhelmed, he surprises me by not wanting to leave and has to be bribed with the promise of a lollipop.

Another couple – friends of ours - comes out of the softball field

Wow. As always I come away from your blog feeling like I just went to therapy. Er, for ME. If I can manage to put my thoughts into words, I'll do that tonight. =) Glad you had fun at the playground and that R did so well!!!

I know that I worry MUCH MUCH more about my youngest (autistic) son than I ever did over my 2 older (typical) kids.

I think that just comes with the territory of having a child with a severe developmental (& hidden) disability.

it is a parallel universe. we move almost undetected these days. but i can see it in everything.

Wow, very interesting. Most of the times we are so involved in our lives that we miss out the fun and the lessons that we can learn from things around us.

And you are bridging those universes with poignancy and perception . . . and speaking as movingly to those of us who are outsiders as well.

And you are bridging those universes with poignancy and perception . . .

This is another great post. A lot of times, when I come back from india come back from work or sometimes, shift parenting styles from NT to ASD kid, I feel I am operating in a parallel universe, I am glad that you put together those feelings into words.

We are still in California and Divya and Sanjay are having fun by the ocean.

I also agree with Julie that I always come away from your blog feeling like i JUst went to therapy... so light.

You have such a way with words :). I can relate to this, it does feel like we're living in a parallel universe in many ways. And the part about that fear at the park and feeling on constant alert... yep that's me too.

I'm glad ya'll had a fun time, I love the pictures of R by the slide and by the numbers :)