to love is to show it

"He coordinates his clothes so carefully.. he has great taste really ..except when its red .. red he adores to a distraction .. so if he starts with a red shirt then everything MUST be red " I am telling my MIL on the phone.

R's grandparents are besotted with him - all three of them.

And every night his gran will call to ask about what he did/said today. These ordinary boring scraps of his day will make her laugh, I can hear the smile in her voice.

She adds"you know Papa used to love red.. I used to tell him..don't wear it .. it doesn't suit your personality.. you wont be able to carry it off. Then one day he was wearing a red shirt that your husband had left behind. You know he really looked good. I feel so bad .. I should have let him wear all the bright colors"
Here are they on their wedding day 43 years ago 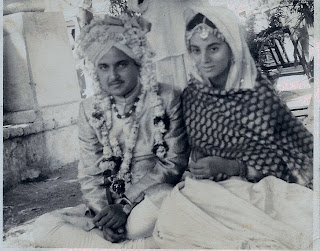 Papa ( my FIL ) was a quiet serious bureaucrat. He died 12 years ago from a fast moving cancer that took him in less than a month

I remember in the initial years after papa died .. Ma's regrets used to be all around wondering how she could have prevented his cancer - if she cooked healthy enough " I made fresh food all the time .. nothing stale.. just sometimes I used to add a little red color because we never had any tomatoes " she would say in tears.

But after more than a decade she does not mourn his passing as much, as she feels bad for about not showing more loving

Before she met me, she would show you love by doing things for you - like cooking a fabulous meal or doing things to make their life easier.
She still does this ( I have resigned myself to my kitchen and closet re-arranged and filed when she visits us here LOL )

But she thought saying it was too silly.

Now she says all the time" I wish I had made a fuss of Papa.. I never fussed,,always too practical"

I am thinking of this now as I have just finished watching the reader ( the story is in Germany-about a boy Michael who falls in love with an older woman . The older woman leaves him one day without explaining. Many years later as a law student he is watching a trial where he is shocked to see his lost love being tried as a Nazi Prison guard. She is sentenced to life. And because she cannot read he sends her tapes of books he has read aloud.He never writes to her though or makes any contact because of his anger towards her Nazi past.But this part so catches at my heart. On the day she is released from prison. The prison manager calls Michael and tells him to help her after her release as she has no one no one at all.)

Tucking R in bed and trying to extricate myself from his hug without waking him. I feel a deep sadness for all the people ( like people who are in institutions and prisons for long periods of time ) who dont have anyone to hug them.Or those whose objects of affection prefer to leave things unsaid

My own life while so hard in many ways, is so filled with hugs, kisses, loving glances, baby talk, nuzzles.

Some days this abundant blessed life takes my breathe away

Absolutely beautiful. There's a tenderness that I feel when I read your words. Just beautiful.

It is wonderful that someone close to R calls everyday to hear of the new things he has done or said...you are so very lucky to have someone this caring.

This is so sweet... really puts things into perspective.

I agree, this was very sweet and beautiful. I love the wedding picture!

I didn't know your MIL calls each day! That's so sweet!! I loved their story and the picture. I agree with you...about loving someone is to make feel loved. It's wonderful that your MIL has learned from you...and has changed...so many older people never change their personalities or habits. She sounds like she's becoming a great grandma.