Fall in the Mountains

October gave a party;
The leaves by hundreds came -

The Chestnuts, Oaks, and Maples,
And leaves of every name.
The Sunshine spread a carpet,
And everything was grand,
Miss Weather led the dancing,
Professor Wind the band

My dear readers - you often hear me wax eloquent of all things Fall .

And this fall is no different

In the mountains, it makes you want to kiss the ground

is  slowly turning into this . 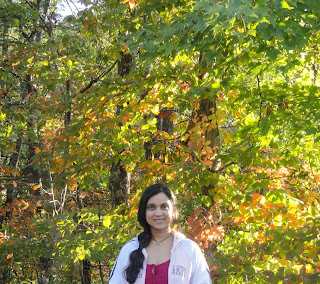 We are blanketed in red and  gold

DH and I love to take walks and we force R to come along .

R tries his best  to outline his ambitious plans of doing Wii FIt and eating Doritos, but we insist he come with us
He starts off flouncing along in a sulk

I am so happy to be out with two of my favorite people. 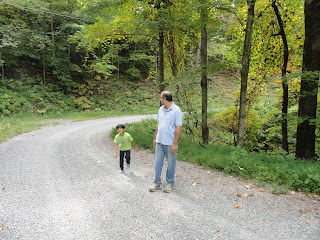 We try hard to pose for pictures

Do you find it easy to get your kids to pose for a picture?

This child would much rather kiss his mother

Or hug me  tight

Than look at the camera

I give up after several tries  and pose just by myself

For surely, its better to show your love to the object of your affection than to put your love on show for someone else

Finally after a year she is moving to another town

I am mortified because E has done SO much for us 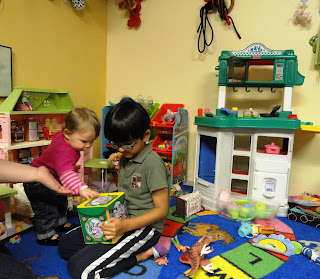 But after she leaves, he cries his eyes out

Finally , he cries himself to sleep

I always think of the way people think that auties may not feel much,

R's problem is that he feels too much.


We have a nice IEP meeting.

They are for the most part nice and sweet and they care about the kids.

His sped teacher is very very knowledgeable about Autism and his mainstream teacher is a kind and sweet and intelligent woman
One of the teachers - his OT actually started to cry at one point in time - saying how much R touched her!

They also at the end of the meeting thanked us !!

We spend a lot of time outside.

The weeks at work are extremely draining and my insomnia is back. ( my mum is not very well and that contributes to my worry )  but I revive each weekend 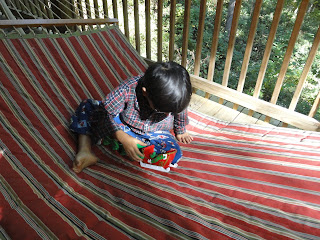 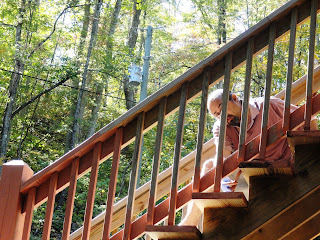 I come out sympathetically, looking particularly unbecoming in my fleece robe and say

" Were you blinded by my beauty"

DH smiles and tells me "you dont know your own powers"

Ah, you live in such a beautiful area. Fall in the mountains... as a Midwesterner, I am jealous.

That is so touching that R let out his emotions after initially holding it in. We had a similar experience when our son's longtime therapist left. Our kids do feel a lot, even when they sometimes do not show it.

I am sure that you look very glam in your fleece robe! :) Lovely post!

I really enjoyed this post. The last bit about your husband is so sweet and funny and your reflections on posing for photographs are so true! We are currently trying to incorporate a little boy with Autism into one of our Reception classes. It is very difficult as he is used to running his own show and is unable to conform to any classroom expectations. He is also quite aggressive with staff and students which is making the situation with other parents very hard. *sigh* I have suggested he be based in the resource room and be gradually reintegrated in to the classroom but he will not do this either! I am so glad it is working out well for you. What a blessing.

Awwww... I just love your writing style... you have talent.

I find my son also feeling too much at times.. just not good at expressing.
And I cringe when i think how I am teaching him that seeing is knowing or at least that seeing leads to knowing... knowing it to be so untrue at times with himself and those with the same struggles.

fall is lovely and the pictures too.

I just love that part of the country in the fall! So beautiful! Love that you mentioned about R's feelings after his therapist left...picturing him with his letters being sad. :( He is a very caring little guy! About your hubby tripping, LOL!, that's so cute what you (and he) said!!!

the part about R crying over his beloved teacher just touched my heart. they indeed feel so much.

i always love your posts and often think of you and your dear family.

another great post K :o) and your DH is absolutely right I think....

I loved this post, especially about fall in the mountains and R spelling out SAD. I find Alex often overwhelmed by his feelings and anyone who thinks autistic people are unfeeling have never spent much time with an autistic person. Thanks for this lovely post.

The fall leaves are beautiful and I am so jealous. I used to love the sound of leaves crunching under my feet and the smell of fall in the air not to mention the pretty colors.

R. is such a caring little guy and I too love the dialogue between you and your DH. Personally, I prefer snap shots over posed pictures.

@ Arizaphale kudos to you for trying

@ Mr Daddy - thank you so much

@Sue - you will not believe it but I was watching the Mentalist this week - which was located on an island and I was thinking of you and thinking of the beauty you live in in Hawaii.. so beautiful it all was

I LOVE fall as well! I feel truly ALIVE in the fall. There is nothing like it!

Dealing with emotions is so hard. I've found that Daniel DOES feel and very intensely too.... he just doesn't have the ability to express what he's feeling. I wonder if that almost makes it worse to have all that feeling inside without a satisfactory way to let it out. Poor R.

I love the interaction between you and your husband. You guys make me laugh. :)

Loved this post, K. I know I feel happiest when my son's arms are around me.

So glad the school is giving it their all - transitions are always so hard on everyone - enjoy the rest of the fall!

Awww, I bet you looked really fetching in your fleece robe! And I'm sorry R had to say goodbye. Goodbyes can always be hard to deal with. I too, love the autumn colours, we don't get them as strong here as when I used to live in the States, I don't know if it's because the changeover from hot to cold is too quick... Enjoy!!

aww...lovely post:-) Love your mountain Fall photos...and the photos of you! Your R is a much loved little boy by all, it seems;-)

Thank you. Your posts are a gift.
Barbara

I am still giggling at your exchange with DH. Thankful he did not injure himself, but not quite sure he didn't speak very much the truth! :)

My heart broke over R's S-A-D letters. I can imagine it would be hard to contain that sorrow when it is right in front of yourself, and safer to express with ones he loves and knows are not going anywhere.

Praying for your Mum. How worrying.

I love the pictures of you and R together! He is just so sweet. I kwym about posing, it is almost impossible to get my boys to pose for pictures, especially the older two. They are just constantly in motion and even when they try to pose it is with such exaggerated expressions and still moving everywhere, very difficult to capture! I love the "continuous shooting" mode on my camera, I use it a lot with them in hopes that somewhere in the freeze frames will be a picture where I can see both of their faces and maybe even with a nice expression :). Bitty does better when he's by himself but it is definitely something we've worked on... all three of them together is almost impossible.

So sad for R, my boys have a hard time expressing their feelings too but they do feel so deeply.

I love that your IEP team is so good with R, it makes such a huge difference.

That last part with your dh really cracked me up too, so funny and sweet at the same time :).

The district is correct in saying that they often get criticized because typically districts do little for the kids and a district's intervention is almost always pathetic. Parents have every right to criticize and expect more. They like you because you ask for little, trust me. If you asked for outplacement or more expensive intervention they would turn on you. You'd be shocked but it is common.