Weekly Round up W/o Nov 16th

it was a simply gorgeous day and I got back home in time.

DH re-engineered our I-MAC so its now super powerful .

Its funny how R gloms onto the best computer- all of last week while the I-Mac was slowing down he was lusting for DH's Macbook .

Today,  because the IMAC is back and better - he will not touch the Macbook with a barge-pole. He shed many bitter tears as DH was loading programs into the I-Mac - alternately pleading and weeping - for DH to move away so he could get on it.

We jumped and swung and played with all the leaves 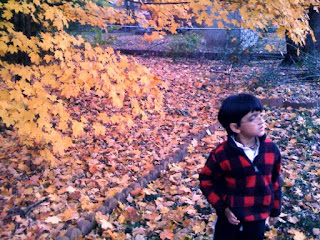 I put him to bed tonight and he was VERY smug though I struggled with insomania tonight as well .

He has been googling different versions of the song"One two buckle my shoe".

I think its very confusing to him that I have taught him the song with 2 different endings ( Nine Ten - A big fat hen and Nine Ten - let's do it again) and so he is looking on the internet for what is the right version.

This turns out to be a hopeless quest as the song on youtube goes all the way to 20.

DH and I have a date lunch which I enjoy very much.

Much to our amusement, have noticed that the server at this Asian restaurant  - puts only the Asian people at the window tables.( we go here almost weekly )

Whereas all the Non-Asians usually have to sit towards the center. The window tables are visible from the outside I suppose they want to position themselves as authentic Asian.

She is nonplussed and is forced to say "Sure"

Its a moment of great triumph for me

Usually we try to talk about non - autism and non parenting issues - but today we forgot about this,

Nevertheless we  a really good chat about autism ( casues and cures )

DH is very smart and very sceptical so he is always interesting to discuss things with !

He beleives Autism is a genetic mutation - nature's response to the way the environment is evolving . He believes all the  other problems that can co-exist with Autism( Apraxia ADHD etc)  are separate from the Autism itself .

My theory is genetic predisposition + environmental insult= autism and then the modified sensory system - leads to the autistic features like stimming, poor peer interaction


Both of us are trained researchers and we frequently find ourselves drawing different conclusions from papers and articles that are published about causes and cures of Autism .
It seems so often that they author has a point of view which is biased and which they are trying to sell

We both agree though that Autism is a gray area land and even after 2.5 years of being really absorbed in it - ( and I mean really ) we still dont know a lot

DH said "Sometimes I dont even know what Autism is anymore "

And there is truth in that

We just need to do more of it

In the evening we really have a nice time jumping and playing with the leaves. - There is a mountain of leaves that DH has piled up in our backyard which affords  great joy to R !

When I get home, I  am surprised to find that R avoids me -he averts his gaze and looks fixedly at the computer

I go to ask DH if R is in trouble.( as he tends to avoid me when he has a guilty conscience )

DH says that R broke his glasses in school

I hug him and tell him not to worry as I should have cut his nails and I know his nose was hurting. Its really my fault and not his.

R cheers up tremendously and we run out to play in the damp and wet evening
at November 18, 2009

"Sometimes I dont even know what Autism is anymore"

K, I feel this way often, is it because we have all these experts telling us what they think Autism is even though they don't live with it everyday? I went to a conference this past Saturday and the speaker said...
"Don't think all the experts and specialists know it all, because we as parents are also experts and specialists"
I really liked that she said that, because it's the truth, we know just as much as they do in most areas.
Enjoyed your post...

i feel the same way about not knowing what Autism is.

I just don't think it's any one thing and that it looks different in different people.

The biggest frustration is that even when "experts" talk about Autism, I feel like I need to know kind of autism they are talking about so I can put their comments in context.

I love that R does all that googling. The only thing Charlotte ever Googles is her name. Which isn't too bad really.

Wow... needing to focus on what he needs, rather than what he has... do you even realize how profound that statement is?

Because ALL of us "have" something. We're all differently wired in some way. Completely individual with our own challenges and gifts.

And to parent like that - to focus on that... WOW.

You blow me away with your insight and writing again and again.

K I am with Rach

R is so fortunate and blessed to have parents like you and you DH.

I was Reading about Prometheus the other day, which of course led to Pandora's box.

I find it interesting that all the "experts" can name you all of the despair and tribulation that came out of that box, but hardly a one remembers or knows about the other thing that was also left in the box...

Now Hope is a busy little word. According to Websters Dict. It can be either a Noun. or a transitive Verb, or an intransitive verb. It can also be an abbreviation, or a biographical name.

What the "Experts" forget is all the bad stuff is already out. It's alright to open the box and let HOPE out.

At the end of the day there are no Experts better for R than you and DH...

I can relate to so much of this. How nice that you got to have lunch with your husband and that you can interesting conversations like that!! I love what you said about concentrating on what R needs rather than what he has. That sounds like a good way. =)