More weekly round up Thursday onwards

We meet some friends for dinner. We have been trying to schedule time together and it turn out if we depend on weekend schedules we shall meet next year. So on an impulse we decide to meet THAT day . Its a really nice famly place - shiny clean - fries to die for. The owner comes and meets us.

R behaves very well - he is very hungry and wolfs down his food . once food has been eaten - he does a few stimmy dances. I tell my friend firmly that he is doing VERY WELL( inspite of his stimmy behavior ) I suppose I am secretly scared that she will feel sorry for me as she is meeting R after 2 years. She says of course he is !

her son is a simply divine child - about 13 - and he is so sweet to his mum when he was 6 or 7 - making his mum little jewelery in crafts class. I tell him that he made me realize that having a kid may not be such a bad thing after all ( I was never much of a kid person - till I had R ). He is red with pleasure 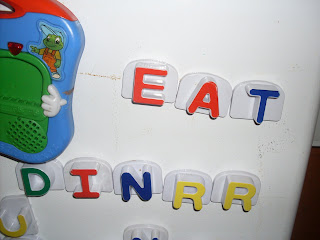 Is another evening that buzzes away without noticing

I cut only the front part of R's hair as he cries piteously when his hair is being cut . But the front part MUST be cut as its getting into his eyes.
So I cut some bits from the front promising just 5 snips. he eyes me suspiciously as I do the countdown!

This I am SURE is the way the Mullet originated .

Someone's wimpy mother - too wimpy to cut all his hair, but also fearling blindness from all the hair in the eyes just  cut the front part

DH chops and I cook furiously in the morning
We are all done by 1 . its still raining thunderously
By the afternoon I shake my fist at the grey skies and am DETERMINED to have fun - I end up remembering that a fellow college had  told me about this cheerleading place which lets you do free play - we go and its a MARVEL - 5 dollars for an hour and its a sensory delight - R has a marvelous time ( and so do I ) 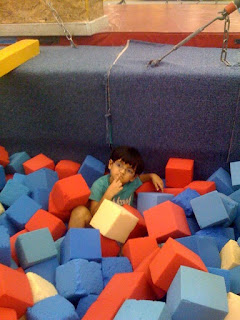 We go to the park with my gorgeous friend and her two gorgeous daughters - we have a simply marvelous time- Her daughter goes to school in the same class as R and R perked up when I wrote her name on the schedule this morning But at the park all three ignore each other.

Autie kids are so peaceful to be with and L and I have a lovely time while our kiddos just play by themselves peacefully - coming to us from time to time for hugs or to explore our purses for treats or lotions
Its so nice to be with someone who is completely in my parallel universe as we understand each other perfectly!
L boasts" C lied to me yesterday" and I clap my hands in delight ( only an Autie mom would know what a marvelous developmental leap the desire the decieve for your own gain is )
At home I basically either take R out or feed him - so we jump in the trampoline or go for a long walk 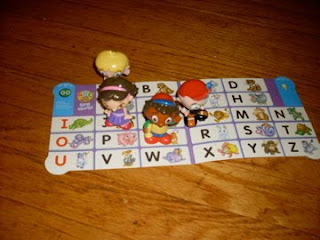 One funny thing I notice is how easily R is able to sequence logic - so when I take June of Little Einsteins and place her on J in the alphabet sheet - he quickly puts Leo Annie and Quincy on L, A and Q !

Once R is in bed, DH and I watch Murder Mystery theater on PBS - which is marvelous and  spectacular.
We also watch Desperate Housewives - but the prior show has ruined me with its high quality and the characters in Desperate Housewives seem petty, shallow and unidimensional. ( I know I will enjoy it again next week as I love its gossipy feel   -but today I am too high minded and sophisticated and about subtlety and art )
I have a hard time sleeping and make a vow to go to bed early tomorrow ( which as you see I shall break tomorrow )

I come back and loll around with R- I start a game with R of Wonderpets - but his teacher calls to tell me she wanted to say "Some progress " instead of "no progress" in his report card. on word approximations.

I take the chance to thank her sincerely  as R goes to school everyday with a smile on his face and this means the world to me !
She tells me that R is a joy and she simply loves him and makes my day
R wants to watch TV so I suggest that we do the Wii Fit ( he makes me do the exercises but he has to vocalize all the words and therefore has some value compared to the TV which is alarmingly passive )
Then we jump on the trampoline and go for a long walk
On the walk - in the stroller - he  throws his shoe down and I do not notice it - He picks out his other shoe and sneakily put its behind him to make me realise that the other shoe is missing while not actually confessing!

I squeal in alarm and tell him that his father will skin him alive as the shoes are a 40 dollar pair of crocs -(  we bought them at the beach last year - we wanted to let R choose and of course he picked the most expi one.) ( DH is the gentlest thing by the way and would never hit R - I just speak in hyperbole and make bloodcurdling threats out of habit ) - we turn around and R quickly points to the shoe and then puts it back on firmly.
The rest of the evening passes too quickly!
at September 29, 2009

Wow what an awesome recap!

we also loved the place out west...even thinking of having Ethan's birthday party there...fun!
Enjoy reading about your days.

I loved it, loved it, loved it. Your mullet comments had me laughing. Daniel needs a hair cut, too. I didn't notice how badly until I saw the pictures I took of him yesterday. It was fun to see that you also get a kick out of it when R spells a word incorrectly. I thought I was the only one who got excited about that! lol! It sounds like R is doing SO well! =)

Gage spoke his first word, it is on video on my blog.
I am so full of emotion...WOW!

ha!!! on the origin of the mullet. you just may be right.

I love how you detail your week...I have trouble just remembering what I did a couple days ago...sigh.

The mullet had me laughing out loud... I am quite sure you are correct!

And what a treat to have a place to jump and enjoy all things gymnastics! My mother was a junior national gymnast and used her training to help with my physical therapy (balance) when I lost my hearing. Fond memories.

Wishing you a wonderful rest of the week!

i love this recap. i want to do one!

i absolutely get this late night panic and guilt about feeling i ought to have done, be doing more floortime-like engagement with fluffy. oy. i get it.

Just wanted to stop by and thank you for stopping by my blog today. I'm glad you were encouraged. I hope you'll stop by again sometime. And, Julie is one of my favorite blogging mamas. You keep good company. ;-)

LOL, I was cracking up about the mullet comments too. I admire ya'll that are brave enough to actually do haircuts... we do buzz-cuts b/c our boys are so jumpy (especially during haircuts) that the thought of putting scissors anywhere near them is too scary!

Sounds like R is doing great - I love the spelling :).