I am leaving for my Masters Degree at the University .

“And when you first get to the University – quickly arrange some things around you that remind you of home – like some pictures” advises a friend.

He knows of such things- as got his MBA from Singapore.

Familiar things are like a scaffolding for our identity


There is such safety in sameness.

I have always known this

Therefore it feels paradoxical, to perceive such strangeness, in autistic rituals

We will lament at their “obsession" with alphabets and numbers

After a while, DH and I, realized that R's passion for numbers and letters was no odder than any neurotypical child’s carrying around a security blanket. Or indeed my desire to ground myself with when new at the University with some objects from home

For instance tonight he wrote on the side of his bathtub ( "we made it" ) which DH observed was a carryover from the "Little Einsteins" show he had been watching where the characters are in Antarctica rescuing a Totem Pole.
DH says he has been watching this show in all his alloted TV time today 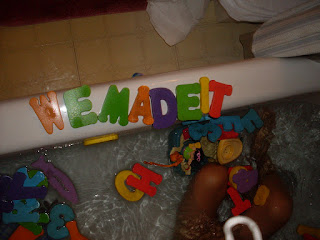 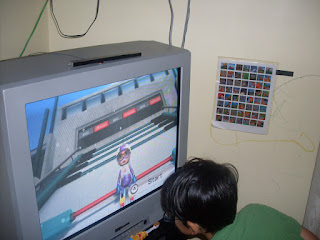 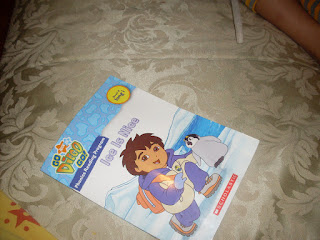 Therefore its clear that, R is currently interested in Snow and ice and is choosing every way  he has to learn about this

In fact - perseveration can be used as a motivational tool to teach.

For instance, tomorrow I will show him how to turn water into ice, do ice games on the Wii with MingMing ,  dress up our dollies and do some pretend play with snow and cold etc

Truly while Autistic people may seem very different than us –(  in some cases we may feel like they are from another planet ) but the reasons for their behavior are the same as for any of us.

When we  feel that we lack control,  ( for surely a world that speaks in a different language that us must make auties feel perplexed and out of control all the time )-  we seek order -we seek sameness

We shake our head sadly when we are asked if our child plays with a toy “appropriately” or if he just lines them up
( Now I feel I should have answered - "but really he is playing with them appropriately.. change the question please - ask if he is playing like a neurotypical child or not?" )

The behavior may look strange but we truly are more alike than different!

This is only one of the many things I learned from Dr Stanley Greenspan
at May 08, 2010

I and my hubby have always believed that our son's obsessions and stimming serve a purpose for him and over time that has proven to be true.

You are so right that ANYONE, nuerotypical or with ASD, has a need for routine and/or order somewhere in their life.


My son loves dictionaries and Mother Goose books and loves looking at different versions over and over and compares/contrasts/memorizes, etc. the info. His echolalia (most quotes are from movie scenes that he will watch over and over) has become a form of communication at times if you listen carefully and don't automatically tune it out. For example, today we had some intense thunder storms and he kept quoting a line from a movie that had the word scary in it. He looked scared while saying it so that must be his way of communicating his feelings.

I love this and relate to so much of it. Sometimes it's so good to be reminded that the rituals and "stims" have meaning. Thank you. I feel ashamed that I needed that reminder. R and Daniel seem so similar, at times. What you described about the "we made it", the computer games and the books are just like how Daniel explores things. As always, it's so interesting and helpful to have similar things described by another person. It's like I see a different side of it. =) Thank you for sharing your thoughts.

As always it is a joy to read your thoughts...
Your insights are very meaningful on so many levels...

Beautifully insightful, K. You are so right about all of this.

Wow, K, this is really moving and insightful. You've gicen me a new way to look at some of Nik's behaviors, too. I always try to see the communication in everything he does; sometimes I don't do so well at that. it never occurred to me that some of it might be his way of trying to learn about something. Thanks.

So true! Such a thoughtful post. He is so lucky you notice and frame your days to further develop the interest of the moment--you are a wonderful mother!

Great insight, and good idea to use the interests as a motivator and a starting point to expand on.

My son doesn't really have rituals or obsessions but he does sensory seek a lot and even thought it looks like puposeless jumping to me, the OT assures us he is hard at work getting the sensory input he nees to function.

K,
Your insight is wonderful. I love your love for your child and your husband, your life. I am so blessed knowing you.

Thanks for your comment today and I am slowly on the mend. Dreading an upcoming bronchoscopy where decannultion has already been denied. Our family will get through this and make it to another year.

Happy Mother's Day!
Hugs and all the love in the universe.
Lisa

I knew I remembered seeing them playing with ice on this site. I found it. This might be fun for you guys if he is still into the iceplay. http://autismgames.blogspot.com/2010/01/iceberg-fun.html

This is so true.
What is normal anyway?
What I find is that our kids are incredibly logical beings.
And you will have an expert on glaciers on your hands pretty soon :)

I am getting some grounding by reading your words here. I will likely return to re-read repeatedly.

I love your perspective.

Love your post and I definitely agree with familiarity and grounding. My brother who was homeless for a couple of years returned 'home' to my house in order to try to get his life back together. I also do little routines the same way a lot that, if interrupted, gets me agitated and I have to start over so as to not forget anything, lol!

I have stumble upon your blog and am not sure how I've missed reading it for so long. I'm so glad that it was this post that I found -- one of my boys has endless stims and I really needed another perspective on them, so thank you :) Lovely post.

I agree. You can't get to know your child until you follow their lead. I find this true with my SN son and my neurotypical children. If you give them the chance, they will lead the way...it's just our job to guide them and teach them.

Absolutely! Take away the point of view that it's deficient, inappropriate, and think about playing with them with the things they love and letting their interests evolve naturally. ACCEPTING them and moving on with what they like ... that's what my son has taught me with his love of garage doors.

Safety in sameness - so true, for any of us.

True also that once we started to recognize the meaning in our boys' rituals, we were better able to understand what they needed, what they felt was important. In the cases where the rituals became problematic, knowing what purpose they served helped us to find more appropriate alternatives that would still meet their needs.

I have sometimes used this example to help explain it to people who ask me about why the boys have to do things a certain way or insist on sameness in certain things - imagine if you came home one day and found an empty lot where your house was supposed to be, you would freak out right? Well, that's what it feels like to our boys when things are not as they expect them to be. It may seem like little things to us but it's important to them.