SOOC Saturday : The road I traveled

As we complete three years of Autism my mind goes back to those early days.
When R turned 18 months with no words and we were starting to get worried – I read a lot about “speech delays”.

So while taking walks with R in my baby bjorn in the evenings
( for I could not bear to be away from him in the evening after having been at work all day ) I would repeat “Mailbox”. “ Leaf” “Road”” Stop Sign “

Careful to say the same word with the same object so as to not cause any confusion
I would point to a pebble and say s “what’s this ?”
But even though I repeated this every evening – R never answered
Then winter of 2006 fell all upon us – the cold , along with the time change, meant that we could no longer take our walks
And so I got out of the habit
A whole season later in the spring of 2007 – fresh from the wound of the diagnosis – I and R resumed our walks

That first day as though by habit – I resumed my practice of asking “what’s this ?”


“he knows all the names of the Little Einstein characters “ he said gesturing to the print out of the Little Einsteins ( which was to become his first PECS ) “I asked him who is Annie……. and he took my finger and put it in Annie .. then I asked him about June .. he knew them all”
With a sudden rush of joy I realized that not being able to say the words did not mean that R had no thoughts
All that wishing and hoping!
And the answer had been right in front of me !
(Often now when I ask Life a question – I wonder if the answer is staring at me and I am just unable to see. For answers can come in forms that we do not expect. Sometimes  blinded by all the noise and sometimes  just not ready)
That evening on our walk I put my hand in his and asked “Touch Mailbox”

He took my finger and put it on the mailbox.

He knew each word ! 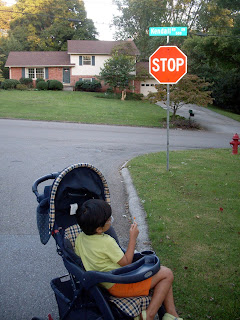 Yesterday when DH asked him what he wanted for lunch he answered casually
“Pizza .. at Mall”

Oh the roads we have traveled

Oh how far we have come!

"What lies behind us and what lies ahead of us are tiny matters compared to what lives within us."
---- Ralph Waldo Emerson

PS Up Early today as R decided to be quixotic and wake up early on the weekend ...so Melody has not even posted on her site and  already have an SOOC post !!!
at February 27, 2010

What lovely words..."pizza at mall" sounds absolutely wonderful!!!! I smile just thinking about it and how far he's come thus far. I'm hoping he got his request!

As I've said earlier, your blog is such an inspiration to me; my precious grandson, Trent, is in the process of being evaluated for autism. He is 16 mo old and does not speak, does not walk, does not respond to spoken directions...yet he does not exhibit other red flags of autism. Every day I come to your blog to see if there's a new post. I am so encouraged by R's progress...I pray the same for Trent. Thank you so much for sharing your insight, wisdome, hopes and dreams.

This is so beautiful. I love the Emerson quote. We have all come so far. So proud of R. Have a great day.

Thank you Jill ( territory mum ) and Robin for the sweet words
Priscilla - your wonderful words are so precious - and what a gift you must be to your children and grandkids - my parents, sister, SIL and MIL have been so invaluable in R's progress - by the way in which they have folded him in their lives and given him so much unconditional love - keep on suppurting and loving- Trent is so very young - have faith and a willingness to go where he needs you to go with him

So happy for you and your DH.

who could know that 3 words could inspire such happiness???

(Often now when I ask Life a question – I wonder if the answer is staring at me and I am just unable to see. For answers can come in forms that we do not expect. Sometimes blinded by all the noise and sometimes just not ready)

R really is such a treasure, and I couldn't imagine you and yours any other way...

It's not that I am not wishing and praying more for you, but I am rejoicing that you are perfect for each other...

"Nature is man's teacher. She unfolds her treasures to his search, unseals his eye, illumes his mind, and purifies his heart; an influence breathes from all the sights and sounds of her existence." ~Alfred Billings Street

K....
Thank you for your encouragement and kind words; we are trying hard to remain positive and hopeful. Trent is the only grandchild we will ever have and is just such a precious gift. My heart breaks for my son and his wife as they travel through this painful journey, but we will love and adore Trent no matter what and will do the very best we can for him.
Thank you...

Oh K I had tears in my eyes through the whole post....then near the end of the post my big goofy grin and the tears on my cheeks = Awesome picture.

What a lovely post and what lovely reflections on your beautiful son and the road you both have traveled.

I remember those first times Charlotte used her own words to ask for something - miracles we will never forget!

Brushing back tears as I type this. As always such wonderful thoughts and experiences. I hope the pizza was delicious.

K - you have all come so far in this journey. You and R are so inspiring. I thought you might enjoy some sunshine, please stop by and pick some up.
http://myjustrightspot.blogspot.com/2010/02/little-sunshine-for-your-day.html
Thanks for sharing R with us, he's wonderful, and you're a great mom.

I feel such joy reading this!

K, this had me in tears... I love reading about your journey and it brings me such joy to see how great R is doing! What an amazing moment when you realized he had learned all those words you taught him after all, he just needed his own way to show you. Beautiful. Those are the moments that just take your breath away, huh? (((hugs)))

Great shot ~ we all treasure our childrens' first words ~ whatever they are and whenever they come :D

I am so happy for you! Those are sweet happenings indeed!

I call James our Sleeper, because he knows and is capable of doing things, he just doesn't show us right away. It is so hard to keep the faith though, sometimes.

The balancing act is a bit better. Probably a lull in the storm but we are trying to keep things together and good.

We have the same stroller, except it's a double. I have fond memories of many good walks and outings with it too.

I hope R enjoyed his pizza at the mall. I'm thrilled to hear about his progress.

Wow, what a powerful, loving story. I can't imagine the road you're traveling down, only that it amazes me. Blessings to you, your DH and R.

I love this - what a treasure! You will always remember "pizza at mall". It is so wonderful to read about your progress. :)

Thank you for sharing this touching story - It means so much more when you hear how long the road has been!

I hope he enjoyed his pizza! :)

Oh I can relate to all of this post.

What a milestone to celebrate that he answered so clearly. Even going so far as to specify which pizza place he wanted to go to!

Stop by my blog and get your award!

R & I are so blessed to both have parents who learned how to communicate with us. What a gift you are to your son!

Hearing those words must have been awesome. I'm so happy for the both of you.

I found your blog while searching for unique and helpful content on autism.  I think you could benefit from sharing your personal story to those seeking connection to other people who are in similar situations regarding autism. Wellsphere's HealthBlogger Network (HBN) is comprised of over 3,000 of bloggers who motivate and support each other through 150 communities.

For more information about joining, please visit http://www.wellsphere.com/health-blogger or email me at hua [at] wellsphere [dot] com.

This is a wonderful post! The light bulb moment for you and your husband--to know that he knew all along--it's the most wonderful light to see isn't it? Great reflections.

rejoicing with you! 'pizza at mall' never sounded so sweet. your boy is so very precious. i am blessed by him every time i read here.

Did you get my email address?