R has always been such a good boy

Never naughty ( whiny and mewly- yes! but not naughty )

But this is changing

Mischief is coming in

He likes to do little picnics parties by himself

We are experimenting with big bottles and little bottles

He has  of course chosen instant gratification and purchased his entire quota of bottles for the month of March in advance.

I have him on my Iphone video committing to not purchasing any more beverages in the March - this is going to be a great exercise in learning about instant gratification and postponing gratification. 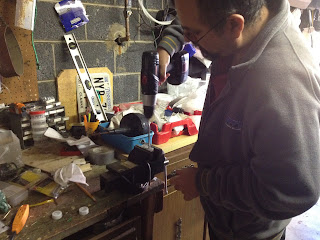 When DH's idea of putting a hole in the cap did not work - R quickly does his own, more successful trick - he puts THREE  Menthos in to get a much bigger fountain going

He is started to steal candy and so

There are patterns on the floor in every room

Every room  is a mess

Our son is finally playing !

Mischief is a milestone.

Wow, R is so inquisitive and creative! He has the qualities of someone who could be a scientist.

I'll be curious to see how your lesson in delayed gratification works out. We have not made much progress in this area with our son so I hope I can learn something from your experience. Great idea for taping his vow on your iPhone.

And that right there is why I threw out every parenting book and let my son do what he wants to do---just on his own time frame.

I have to hide the Menthos and Coke experiment from my son. He'd be all over that!!!

YEsss. love this...you really have to explain this experiment to me...kids should be messy. Wonderful pictures.

its very very easy Porgerour - - you just open a bottle of coke- put a menthos in it and run !!!
R discovered that putting multiple menthos works best
DH thought that we would make a small hole in the cap and so the liquid would gush out "higher"- but it was hard to put the cap on fast enough

will let you know Yuji - showing him the "proof " ( video recording ) has really helped so far :-)

Wow - love what your friend Jos said!
You are such a patient mom :-) I know I should be happy yhat my 3 year old is curious about how liquid flows out of cups (he loves to upchuck water, juice, name it) but I often scream at him. I must remember he is probably doing something his NT peers did at 18 months...

This I relate to my girl with cerebral palsy: when you can't talk or walk it is hard to be naughty, but sometimes she manages it, and with such a twinkle in her eyes that I have to forgive her :)

absolutely" looking for blue sky"... have to forgive your smiley sweetie

thank you ggop
I dont blame you one bit - patience is indeed hard to come by with sticky liquids !!!

Love the post and pictures. R is so cute and seems very curious! I wrote a post the first time Alex got in trouble at school for playing table hockey with another boy during class. Unlike most parents, I was so PROUD! I was thrilled he was playing and interacting with another child. Who cares if he got into some trouble for it? It was such TYPICAl trouble for a 1st grade boy and I was thrilled!

Love the Mentos and Coke. It sure looks like R has discovered play and is having a blast!

I love cheeky, funny, mischievous kids. Even Nick has a sense of humour and I take great delight in his obvious cheekiness. Thomas used to do the Menthos experiment... I wonder, has R ever tried the volcano experiment, the one with vinegar? Great fun! :)

What a beautiful post. Wow. I *loved* every minute of it!! And you guys are *so* cool doing all those menthos experiments!! I need to look them up on youtube, cause I can DEFINITELY get down with that!! So happy to hear mischief is making you smile! And his hiding in the blanket? Too adorable for words!!

Watch out, K! We both have mischief-makers! Isn't it great?

Mischief certainly is a milestone. There's no much to consider when being sneaky: knowing that it's wrong, considering that YOU will not be happy, knowing he has to be sneaky, actually being sneaky, etc. It's quite amazing, really.

Little Bird has always hit those milestones, they just take her a lot longer: walking, talking, etc. They come in HER time. I try to be patient. I hope and I pray. And I work- really really really hard!

I love, love, love this! You are so right...mischief is a milestone. I love the hope in the post! I often remember your words when I am frustrated about my son and play. I feel some days as if we have missed something in Floortime, and I have to go backwards, rather than rushing.

absolutely what a fantastic moment for Alex !!!

ooh di - I better google that - it sounds awesome

it sure is Brenda - love it

Exactly why our bonus room looks like a disaster area all the time! BONUS!! LOL!! Let him explore because who really knows what goes on in those handsome heads of theirs. In their own time is right. I think I need the lesson on instant gratification. Maybe I should do a message to myself!! Great post!

I love this whole post! ...and I love R. What a sweet, sweet boy. I love how you said that, "Mischief is a milestone". :D

This is more magical than mischievous, methinks! But yes, mischief IS a milestone! I love your beautiful perspective on things

absolutely !!!
I need the lesson on instant gratification as well of course

Small victories are wonderful, I think they're even better when they're a little naughty.

I can't count how many times something you've written on here has made me think a little more or given me joy.